Why should I desex my pet?

Desexing involves surgically removing some of your pet’s internal reproductive organs – testicles for male dogs and cats, and uterus and ovaries for females.

If you don’t seriously wish to breed from your dog or cat, we recommend desexing them. This will prevent accidental pregnancies, which can carry health risks for the female and the pups. Undesexed male dogs can also be more likely to get into fights, and undesexed male dogs and cats are very likely to mark their territory with urine streams/sprays, which can be very unpleasant to live with! Most importantly, desexing your pet can come with certain health benefits, such as prevention of pyometra (life-threatening uterus infection that can be quite common in middle aged and older females), and prevention of testicular tumours in males. 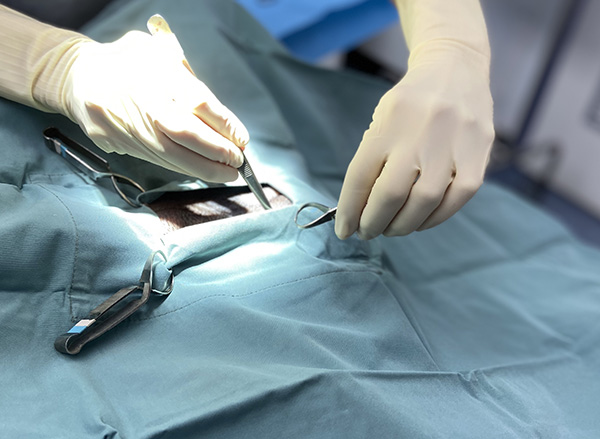 It is important to note that desexing dogs and cats does increase the risk of weight gain in both males and females – this can be managed with a good diet fed in correct quantities, and regular exercise. In some female dogs, desexing can also increase the risk of urine leakage later in life, but this can be managed with medication prescribed by our vets.

What does desexing my dog or cat involve?

Desexing surgery is done under a full general anaesthetic as a day procedure. We normally advise making a booking for your pet in advance to guarantee a particular day. Please do not feed your pet after 9pm on the night before the booked procedure, and take away their water early on the morning of surgery – this will help reduce their risk of dangerous vomiting and choking under anaesthetic.

During the desexing surgery, male cats and dogs will have their testicles removed via small skin incisions. Female dogs and cats will have their ovaries and uterus removed via a midline incision over their abdominal wall. All animals get strong injectable pain relief as part of their pre-anaesthetic sedation, and all are given longer-acting anti-inflammatory pain relief injections to last 24 hours afterwards. All but male cats are then sent home with several days of ongoing anti-inflammatory medications to help with their comfortable recovery at home (we find male cats generally don’t need this, as their skin incisions are so small).

During the recovery period, we normally recommend that male dogs and cats are kept quiet for several days after, whilst female dog and cats should be kept quiet for 10 days post-operatively. All pets should have their wounds checked daily, and be kept clean and dry (no baths!).

When should I desex my pet?

We recommend desexing is performed by the following ages:

These age recommendations aim to minimise the risk of allowing your pet to become sexually mature and accidentally mating, but are also trying to adhere to the current evidence that in some larger breeds, allowing more skeletal growth prior to desexing may bring some joint development benefits.

If your female dog shows signs of becoming fertile by “coming into heat” (having bloody vaginal discharge, swelling of the vulva, behavioural changes such as becoming more alert or nervous, and standing still to allow male dogs to mate with her) before she is desexed, and you’re not wanting to breed from her, it’s OK. Simply keep her away from any undesexed male dogs for 3-4 weeks after you notice these signs, to prevent an accidental mating. Female dogs come into heat usually twice yearly.

In female cats, signs of “coming into heat” include yowling, rolling around on the ground more than usual, being more affectionate, and lying down with their back-end up in the air. You may sometimes also see some bloody vaginal discharge. If you notice these signs, keep your cat away from male cats for at least 2-3 weeks. If the heat is not settling after 2 weeks, please contact one of our vets to ask for advice. Once they have started, cat heats normally happen every 3 weeks until the cat is desexed.

If your pet is older, and you decide that you would like them desexed, you may book them for desexing at any point, provided your female is not showing any signs of being on heat.

What if I don’t want to desex my pet?

If you do decide that you want “grandpups” or “grandkittens” in the future, it is still important not to allow your female dog to mate until they have reached full maturity (normally at least one year old for small dogs, and at least two years old for medium to large dogs), as they may not be developed enough themselves to safely have and care for pups. This is important in female cats as well – we recommend they be a minimum of one year old prior to any mating.

Before you plan to have your pet mated, it’s a great idea to check with our vets that your dog or cat is up to date with vaccinations, on safe worming and parasite prevention protocols, and on the most appropriate food type. This will help the pups or kittens get the best start in life!

What does rabbit desexing involve?

Rabbit desexing involves removal of the testicles in males (via a small skin incision), and removal of the ovaries, uterus and cervices (rabbits have two cervixes!) in female rabbits via an incision made in the midline of the abdominal wall.

Desexing surgery is done under a full general anaesthetic as a day procedure. We normally advise making a booking for your pet in advance to guarantee a particular day. Unlike dogs and cats, rabbits do not need to be starved prior to surgery, as not only are they incapable of vomiting, but starvation can also cause dangerous gut stasis issues. Therefore, it is very important to get rabbits eating as soon as possible post-surgery, so we request that owners bring their rabbits in for surgery with a little packed lunch of all their favourite foods from home.

All rabbits will receive a cocktail of strong injectable pain relief as part of their pre-anaesthetic sedation, and all are given longer-acting anti-inflammatory pain relief injections to last 24 hours afterwards. They will then be sent home with several days of ongoing anti-inflammatory medications to help with their comfortable recovery at home – this is pleasantly flavoured oral liquid that is generally well-accepted by rabbits.

Why should I desex my rabbit?

We would recommend desexing any female rabbit that you don’t plan to breed from by one year old. This is due to fact that from 3 years old, undesexed female rabbits have up to a 60% chance of developing cancer in their uterus.

Secondly, desexing rabbits is often recommended to help with temperament. Undesexed rabbits can be more likely to become territorial to other rabbits and to humans. Despite their appearance, rabbits can be quite aggressive when guarding their territory, and can cause significant wounds to each other or the hands of their owners trying to handle them.

When should I book my rabbit for desexing?

If you have male and female rabbits that you don’t plan to breed from (even brother and sister rabbits), we would recommend desexing them as early as possible. A good guide is to book them in for desexing as soon as they reach 1kg in weight (which normally means they are big enough to handle an anaesthetic more safely). Rabbits can reach sexual maturity by 3-6 months of age, so leaving male and female rabbits together runs a high risk of unplanned pregnancy, which can be dangerous for the young mother and her kits (babies).

What recovery is involved in rabbit desexing?

During the recovery period, we recommend that you keep your rabbit confined to a clean, dry area for 7 days post-operatively, and that you try to prevent your female rabbit performing too many “acrobatics” for 7 days after the surgery. Male rabbits are generally OK with just a few days rest due to their much smaller wounds. Check your rabbit’s wound daily for 7 days post-operatively to make sure there are no signs of infection (redness, swelling, discharge).

It is most important to monitor your rabbit’s eating and pooing – please phone one of our team to ask for advice if your rabbit is not eating and/or passing faecal pellets by the morning after surgery, as this can indicate dangerous gut stasis issues and may require rapid medical intervention.

Beach and Bay Vet is an inclusive and welcoming space for everyone.

SEND US A MESSAGE